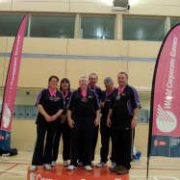 Parkins, fresh from representing England in the World Veterans Championships in New Zealand and Musselwhite, from a record 14th Mendip Singles Title didn’t drop a game in winning the over 40s doubles. Parkins reversed last year’s UK result to beat Musselwhite in the over 50s semi -final and went on to claim the Gold in style.

The World Corporate Games also have 8 Championship Divisions spanning all 22 sports, with the largest being for over 200 athletes from an organisation. PSP underlined their dominance by also taking the Championship across all sports for 6 to 10 athletes.

Musselwhite summed it up by saying ‘We thought we’d be competitive with our four men all from our PSP British League team. Our two women were brilliant and won all their events, holding off a strong Turkish challenge . Winning the Division 2 Championship across all sports was the icing on the cake!’